The unfortunate thing is that although most puppies are sold at eight weeks of age, it’s one of the worst times to introduce puppies to new things.  We know now that at eight weeks, puppies are going through a fear period: they may suddenly be scared of things that have never bothered them before, and it’s possible that these experiences may imprint them for life. In other words, they may hold onto that fear of the scary man or child or loud noise—forever. So going for their first car ride, meeting new dogs, new people, or being introduced to a new environment, to say nothing of being removed from their pack of siblings for the first time in their lives to spend their first night alone in a new setting, can be very traumatic. Seven or nine weeks of age is a better time to take puppies home—when they are more confident and not as easily influenced by fear.

My eyes felt bleary when I finally found the appropriate “What to do when your puppy bites” chapter in response to my scratched, bleeding arms. 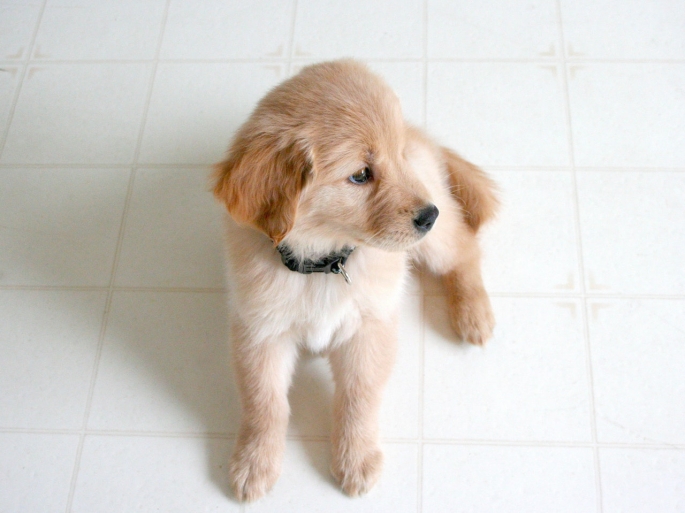 “The book says to grab her muzzle, look directly into her eyes, and say ‘no bite’ in a stern tone,” I read aloud. “If she bites again, do it harder. Ow!” I dropped the book on the table and reached down to swipe Sascha away from where she was attached to my jeans. “Sascha, stop it!” I dropped to my knees and grabbed her small, snarling muzzle in my hand, but she whipped away from me and made another playful lunge. She was all baby growls and needle teeth and when she made contact with my skin, it hurt. “Shit! No bite!” My voice was very stern and very loud this time, and when I made a grab for her, Sascha danced away and flattened herself on the floor four feet from me, not sure whether to be scared or to join in the devilish game. She chose the latter, sprinted back to me, grabbed my slipper in her teeth, and tugged as hard as she could. This time I nailed her muzzle with a firm hand and shouted “No bite!” while glaring into her eyes. She cowered, ears flattened to her skull. With her tiny tail curled up on her belly, she crawled under the couch and all we could see were her big, brown eyes peeking out.

Tears burned my eyes, and an ache in my chest threatened to derail me. “I did what it said!”

“You didn’t have to do it that hard!”

I tried to pull Sascha out from under the couch, but she stayed just out of reach. Would she ever recover?  I was sure she wouldn’t.

Moments later, Sascha fell asleep—a ball of golden fur all alone under the couch—but when she awoke, she seemed to have forgotten.  She bounced into the kitchen, gobbled down the kibble I offered her, peed again on the carpet before we could entice her outside, then grabbed a shoe from the mat by the front door and charged around the house, full of glee. The extent of her joy was contagious, and we laughed, mirth rising from our bellies until tears ran down our cheeks. Finally, we managed to herd her outside to our fenced yard, she did her business, then settled down to chew on a stick. We heaved a sigh of relief and dubbed her “Baby Jaws”.

Somehow, we managed to survive the rest of the day.  We barricaded off the kitchen, found some tennis balls, and Joel drove to the grocery store and returned with a couple of stuffed toys, a rubber hamburger with a squeaker (which she demolished instantly), and a Nyla bone that she set to work on with those killer teeth. We played tug with an old sock (unwittingly reinforcing her delight in these readily accessible toys), and tossed the ball for her, the tennis ball enormous in her little jaws. We discovered that she was a natural retriever.

What would we have done to prepare for that day now, in 2018?

This site uses Akismet to reduce spam. Learn how your comment data is processed.